Your guide to the four dimensions of Soccerkinetics

Soccerkinetics is an innovative, creative and neuro-centered soccer training, in which basic techniques, such as passing, goal kicking or dribbling, are enhanced by a cognitive, coordinative and / or visual dimension. Thus, the training is designed to more than meet the requirements of a modern football player. 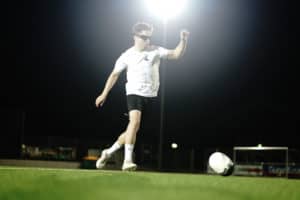 What does Soccerkinetics Training actually mean?

In Soccerkinetics training there are four dimensions:

We combine all these dimensions with the fourth dimension - the basic techniques in football: passing, dribbling & scoring.

This results in the Soccerkinetics formula:

Coaches often justify the defeats of their own team by saying that their players have made the wrong decisions in many situations. That is not an excuse either. However, by incorporating cognitive elements, you or your players can make the right decisions more often!

In general, skills such as anticipation, attention, creativity, speed of action and game intelligence are more important than ever for outstanding footballers. Only a few players are able to solve complex game situations well and quickly. That is why the demand for players who show a high speed of action and playing ability is getting louder and louder. There is still a lot of room for improvement, especially in amateur football. Many experts assume that cognitive training will gain immense importance in football. Soccerkinetics specifically incorporates elements of the cognitive dimension into the training to unlock the dormant potential of your brain. 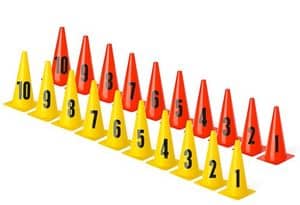 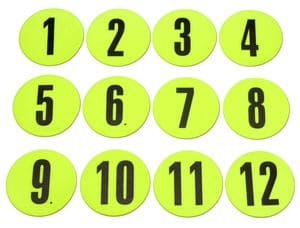 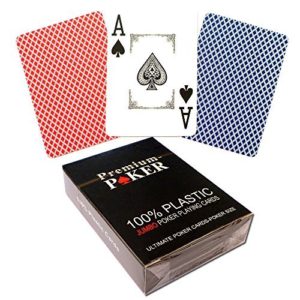 Coordination is the interaction of different perception, control, regulation and motoric elements to an orderly, purposeful sequence of movements.

For you as a footballer, it is important to develop your coordination skills to the highest level. Why? Any form of purposeful movement depends on coordination. So, generally speaking, anyone who trains their coordination trains their ability to carry out high-quality movement programmes and to adapt them to the situation. In the context of coordination we speak of 7 basic skills:

In the training packages of Soccerkinetics you will find numerous exercise videos, which address and specifically optimize a variety of these coordination skills. In addition to certain movement tasks from the field of differential learning, your coordination as well as your technique in soccer will be stimulated by the Changing Game Device and neuroathletics training, which will lead to unexpected improvements.

In the Changing Game Devices, the principle is to continuously change your game device, i.e. the ball you are training with. This allows you to achieve greater improvements in your technique more quickly.

Now you might ask yourself, why all this? Let me ask you a question in return?

Which country has consistently produced the best technical footballers over the last 60 years?

Whether it's Pelé, Zico, Ronaldo, Ronaldinho or now Neymar - Brazil has always managed to produce the most technically skilled players. Why is that so?

A decisive factor is certainly the circumstances in which many Brazilian footballers have grown up. For most of them, a high-quality football and a level, beautiful turf was the exception. Instead, Brazilian youth players found themselves in environments where they played with rifles, tennis balls or old leather balls. At the same time, they played on completely different surfaces. Sometimes on grass, sometimes in the sand, then again on asphalt. These constant new conditions, to which the players had to adapt again and again, have trained their technique extremely well. The background to this is that the players are constantly confronted with new challenges due to the changing conditions. A tennis ball is much smaller than a football and at the same time bounces differently. When playing on sand the ball can always bounce. Accordingly, full attention and concentration is required. In contrast, football on asphalt is much faster. These constantly new challenges and deviations from the norm reflect what is known in sports science circles as differential learning. Learning effects are not created by constantly repeating patterns or movements, but only by creating so-called 'differences'. Accordingly, it is not surprising why these players have an extremely strong technique.

In this respect, the following balls are suitable as change game devices and should be used regularly in addition to "normal" football: 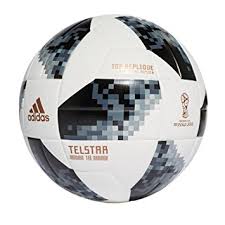 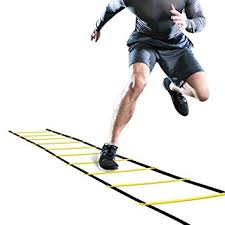 Our eye influences almost 90% of our perception. We are affected by 11 million sensations per second. With Soccerkinetics you become a 360° player. You improve your perception, expand your field of vision and keep your overview on the court. Your eyes are the key to success.

You cover your dominant eye with the eye patch. Aside from the fact that it's new and fun for most players, the weak eye will have to work hard to keep track. The background is that three-dimensional vision, the view into depth, is erased. This requires a stronger concentration to make friends with the room. Furthermore, the radius of the field of vision is limited. If you remove the eye patch from your dominant eye in the last third of the training, you will clearly feel and enjoy the difference.

To do this, stand upright and concentrate with both eyes open on a distant target. The body should be aligned so that both shoulders are equally far away from the target.

The arms are stretched out and raised, and the hands are brought together/over each other in such a way that the target can still be observed in a concentrated manner through the hole that has been created.

Now put your hands on top of each other so that this hole gets smaller and smaller until finally only the target is visible.

If one closes the right eye and the target is still visible, there is left dominance.

Control by closing the other eye: The target is no longer visible.

Alternatively, you can look through the hole created with your hands and look at the tip of someone else's nose. The eye of yours that the person sees through the hole is your dominant eye.

Get the Eye Patch

Pinhole glasses are glasses with holes. It is therefore often referred to as pinhole glasses. Pinhole glasses are used for visual relaxation and can be part of an individual, naturopathic eye training. We all know that our physical performance deteriorates if we move too little or only one-sidedly and do not pay attention to our body.

Only with our eyes do we not seem to "see" this, although they are constantly overstrained and also extremely one-sidedly burdened by our modern information society and the increasing flood of data through computers, television and print media.

This is where the pinhole glasses come in. If you look through the pinhole glasses, you will see an image consisting of many individual segments that can be focused very sharply. These are put together by your brain with increasing mobility of the eye muscles to form an overall picture.

The dribbling glasses prevent any view downwards. You are forced to dribble the ball without seeing it. The T-PRO dribbling glasses force you as a footballer to keep your head up while you control the football, so that you can overlook the field.

Strobe Shutter Glasses are shutter goggles that partially deprive the wearer of the goggles of visual information. This happens by the lenses becoming alternately dark and light again. Your brain has to learn to do what it wants when wearing the glasses, without complete visual information.

What do you want to do next?

Show me the bundle